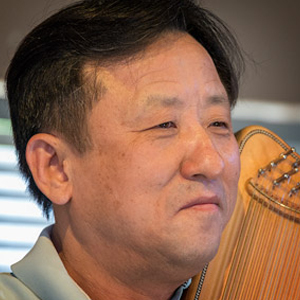 The multi-talented Ray Choi, 2011 winner of the Autoharp world’s two premier competitions, the Mt. Laurel Autoharp Gathering (MLAG) and the Walnut Valley Festival (Winfield), is also the highly regarded luthier of the custom-crafted, uniquely shaped, beautifully-toned Ray Choi Song Bird Autoharps (available at www.raychoiautoharps.com), and a talented teacher with scores of students in Southern California and presentations at numerous festivals including the California Autoharp Gathering (CAG).

Born and Raised in South Korea where he first nurtured his musical talent, Ray immigrated to the United States over 25 years ago. He originally supported himself selling Oscar Schmidt autoharps and in the process became one of the company’s top distributors. Eventually, Ray and his wife Jane opened Grace Music in Garden Grove, California, where they specialize in selling autoharps, violins cellos. They have even managed to pass on their love of music to their son who tours across the United States and Asia.

Ray is justifiably famous for developing his “Hummingbird Tremolo,” an original technique that Ray has mastered over a period of many years of hard practice. The tremolo effect is achieved through a fast fluttering movement of the fingertips once thought impossible to achieve on the autoharp. In the process, Ray has added a new dimension to advanced autoharp playing and enriched the range of the