The California Autoharp Gathering (CAG) was founded in 2002 at the Mendota Unified School District. Students at the school district had the opportunity to take classes in autoharp, guitar, pep band, mariachi, and folkloric dancing. The CAG was established to give these students a chance to go to a fine arts camp; where workshops, concerts, and training would be made available to them. In addition, participants from around the United States were invited to join the CAG to celebrate and enjoy a three-day festival with the autoharp being the primary instrument of study.

For CAG 2003 and CAG 2004, the festival was held at Mendota High School, a scenic and comfortable establishment for all participants. Mendota, California is located in the middle of Central California, equal-distant from Los Angeles and the Bay Area. Most participants camped in tents or RVs at the high school. Attendance did surprisingly well during these two years.

However, it was noted that Mendota High School and the community had several limitations under the original vision of the event. There was a lack of indoor housing for staff and participants. There was a lack of a “camp” atmosphere for the children of Mendota Unified. Therefore, a subcommittee was formed to find a more suitable location to house the CAG.

During the summer of 2004, a suggestion was made to visit the St. Nicholas Ranch and Retreat Center, located in the Sierra Nevada Mountains, about 40 minutes east of Fresno off Highway 180. An initial visit to the Ranch revealed a beautiful atmosphere; scenic and gracious in the surroundings. The Ranch had plenty of indoor lodging; both with motel-style lodging private rooms and dorm-style rooms. Camping space was available directly at the dorm area, giving campers access to indoor restroom facilities. A first-class dining room with catered home-cooked meals was available. Finally, the Ranch was perfect for our fine arts students – there were plenty of “camp” style activities as well as room for fine arts workshops.

Arrangements were made with the Ranch and the California Autoharp Gathering moved to its new location for CAG 2005. The move proved to be overwhelmingly successful. The Ranch provided a remarkable sense of ambiance to the participants who in turn rated the location as “the best site for an autoharp festival in the United States.” CAG 2005 gave a tribute to the Carter Family, with special guest Dale Jett (son of Janette Carter) making the trip from Hiltons, Virginia to showcase the new CAG at the St. Nicholas Ranch. It was a very successful event in the new location. 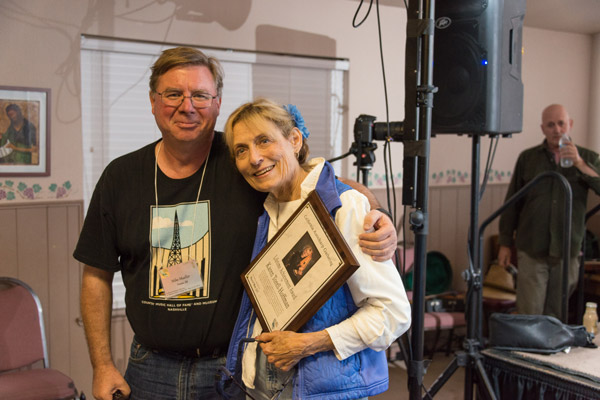 CAG 2006 was simply spectacular. A tribute to Kilby Snow, the first master of the autoharp, was the theme of the event. Kilby’s son Jim Snow was the honored guest and made his first plane ride to California to join our festival. Jim taught and performed the famous “Snow-style” autoharp along with Joe Riggs and Mike Seeger. The new “California Autoharp Gathering Lifetime Achievement Award”, a tribute of appreciation to special artists who have appeared at the CAG was introduced and awarded to the first four recipients: Jim Snow, Bryan Bowers, Mike Seeger, and Kenny & Marta Hall. These awards were highlighted with rare film footage of the honorees. Again, a record attendance by participants was reached. It was a fantastic three days!

A tribute to the sounds of the 1960s was the theme for CAG 2008. Some of the best jams together by staff and participants highlighted the evening. The Sunnyside High School Chamber Choir opened Friday night’s concerts with a memorable tribute to songs and artists of the 1960s. Their finale, “We Shall Overcome” was gracefully performed by the choir and the entire audience which made for one of the finest moments in CAG history. “Lifetime Achievement Awards” were received by Ray Frank, Carey Dubbert, and Kathy Larisch & Carol McComb (Kathy & Carol). Staff also included the Bluestein Family, Bryan Bowers, Chaskinakuy, Bodie Wagner, Karen Mueller, Ron Thompson, the Canote Brothers, Lucille Reilly, Hans York, Gove Scrivenor, Hal Weeks, Todd Crowley, Pete Daigle, Kevin Hill, Barry Shultz Kenny & Marta Hall.

After a break in 2009, CAG 2010 returned featuring the sounds of inspirational music combined with western “cowboy” songs. Record attendance by CAG participants highlighted memorable workshops and concerts. Ann Norris, Karla Armstrong, Roz Brown, David Rainwater, The Black Irish Band, and Bob Fish were new staff members joining many other returning artists. The “Lifetime Achievement Award” was received by Pete Daigle, a charter member and partner with CAG. Pete is one of the premiere autoharp designers and builders in the world.

With the growing popularity of the Gathering, we added a fourth day for early-arrivals on Thursday – which now include evening concerts. It’s a great settling in and we hope every attendee enjoys that extra arrival day with us this year.

We are greatly looking forward to another special gathering this year back with the wonderful hospitality at the St. Nicholas Ranch. Several new artists have agreed to join us for the first time at the CAG along with many favorite returning staff members. We’ll have a full house! Great weather and great food! You are especially invited to join us!