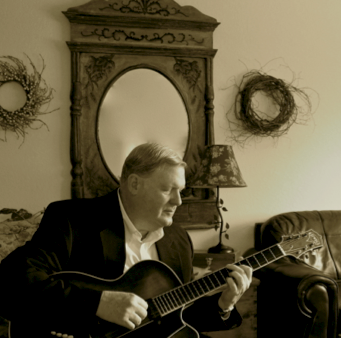 John has been a guitarist for most of his life and a guitar teacher since 1963. He plays a wide variety of music from ‘Old Timey” and folk music to swing and light jazz, with many stops in between. He was a member of the Bay Area trio Guitar Extravaganza, a performer at each Healdsburg Guitar Festival from 1995 to 2009, and was with a large Bob Wills-style​ band which performed for the Western Swing Society in Sacramento, California.

John performs as an accompanist, in small ensembles, and as a soloist. Most recently John has been accompanying renowned fiddler David Rainwater at venues around northern California. He has also been performing with The Raspberry Jam Band at the Sutter Creek Ragtime Festival, The Jazz Jubilee in Sacramento, and The West Coast Ragtime Festival in Sacramento. This is in addition to being on the teaching/performing staff of The American River Acoustic Music Camp for three years and the California Autoharp Gathering for six years.

As a finger-style guitarist, John Massey has developed a unique and pleasing style all his own. In his earlier years,​ John was a pianist and has used that experience to create solo guitar music that simultaneously blends melody, chord, bass, and rhythm – the full package. His current repertoire consists of a wide range of music from Stephen Foster, Tin Pan Alley, the Big Band Era, to Doo-Wop with an assortment of folk selections thrown in. His rich harmonies and chord choices have earned him a reputation as a master guitarist and musician.

John (retired June​ 2011) has been a teacher in California schools since 1972, most recently as a First Grade Teacher in Lincoln, California. In 2007 he was the recipient of the “Maynard Moreland Classroom Teacher Award” from the California Music Educators Association as “the Outstanding Classroom Teacher in the State of California who uses music as an integral part of the curriculum.” He was selected as a “Teacher Who Makes a Difference” in his district and was nominated three times as “Teacher of the Year.”

Along with teaching school, from 2002 to 2011 John Massey had been a staff member and presenter for the Sierra North Arts Project at UC Davis, a regional site for The California Arts Project (one of the subject matter projects of The California Department of Education). John has served as the Arts Coordinator in his school district and is a graduate of San Jose State University with a degree in Art.