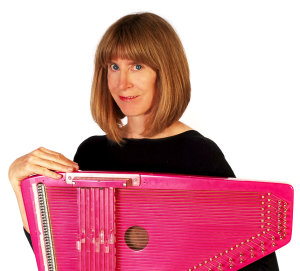 Bonnie Phipps is many things: an Autoharp Hall of Fame inductee, a Mountain Laurel Autoharp Champion, a two time Winfield International Autoharp Champion, a published author, a national awards winning recording artist, a folk singer, a spoons and jaw-harp player, a storyteller AND an undeniable hit with both adult and family audiences!  She brings her individual virtuosity to craft intricate instrumentals, and songs that are both fresh and timeless.

Bonnie has recorded and performed with The Colorado Folk Ensemble (Autoharp, cello, violin, and guitar) whom Pete Wernic of Hot Rise coined as “Old time new age chamber music”.  They played at many prestigious venues including, the Hudson River Revival, the Philadelphia Folk Festival, the Winnipeg Folk Festival, the Kerrville Folk Festival, the Winfield Folk Festival, the Old Songs Festival plus 3 years touring for Columbia Artists Management.  Phipps’ has also written articles on the Autoharp for Frets magazine. She has been a featured performer and workshop leader several times at the Mountain Laurel Autoharp Gathering, the Willamette Autoharp Gathering, Augusta Autoharp Week and for Sore Fingers in England. She also taught a 5 day Autoharp class for Haystack.  She has three recordings which feature the Autoharp: “Autoharpin’,” “The Colorado Folk Ensemble,” and her new arrival, “Anything Goes.”

… frankly, I can’t imagine any Autoharp player anywhere who won’t appreciate Bonnie’s version of “Malagueña” which pushed her over the top. It is a masterpiece by any standard and has already found a permanent place in MLAG contest lore.*

… she blew me away with her choice of repertoire and creative arranging and in the process opened up a whole new horizon for what’s possible on Autoharp.

The music and the way you played it was simply outstanding — innovative, musical, flawlessly executed, and passionately expressed.

Bonnie also founded The Elastic Band, who performs for family audiences nationally and internationally.  She has recorded two CDs, “Monster’s Holiday” and “Dinosaur Choir,” and each won Parent Choice Gold awards, and the National Parenting Award.  A few children’s performance highlights include concerts for the Tampa Bay Performance Arts Center (FL), the Lincoln Center (CO), the Maui Philharmonic (HI), Bridges Auditorium (CA), the Richmond Children’s Festival (VA) and the Guam Association for the Education of Young Children. She also has performed solo for the New Zealand Library Systems.